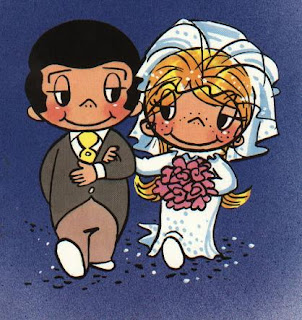 Having been to a wedding over the weekend - which was lovely, it only seemed appropriate to blog about 'love and marriage'. As Antoine de Saint-Exupery stated "Love does not consist in gazing at each other, but in looking together in the same direction."
In a recent study by Dr Roni Tower et al from Columbia and Yale Universities, it was found that the style of marriage you are in alters your chances of dying from a variety of medical conditions 'by a factor of up to five.' Previous research had already established that being married as opposed to being single was good for health, with positive effects being significantly greater for husbands when compared to wives. Dr Tower has now added to this knowledge by saying "it's vital to get the choice of partner right if you are going to get the full health benefits from marriage."
In the study Dr Tower asked married couples (out of earshot from each other) who they relied on most for emotional support and the lowest mortality rates were found for those who named their partner as their key source of emotional support and closeness. However, his reasearch also again showed that it's the male gender who benefit more from marriage in health and mortality terms. In fact, women don't appear to receive many health benefits from marriage compared to men... I'm only reporting the research.
Posted by Dr Michelle Tempest at 2.4.07

Still a mans world then

Hope you had fun. Did you catch the bouquet or not? ;)

I can't help but reply with the classic...

"Do married people live longer than single ones or does it only seem longer?"

I was also at a wedding at the weekend, but I don't remember seeing you so it must have been a different one.

"However, his reasearch also again showed that it's the male gender who benefit more from marriage in health and mortality terms. In fact, women don't appear to receive many health benefits from marriage compared to men... I'm only reporting the research."

Lol Michelle, then why do women still outlive men.
I'm talking especially about the older generation, you know the ones who married for 'life' or till death do us apart.

I do love that,
Love is not gazing at each other,
but looking in the same direction

The secret of life, love & happiness
In a nutshell

Hi Michelle,
I love that Saint-Exupery quote too. I've never heard it before. Have to agree with the study that says men benefit more than women from marriage although I'll bet they'd never admit it.
I think most women know that emotional support comes from their women friends in a greater measure than from their husbands. They support each other in their widowhood too or divorcehood.
Regards
jmb

women live longer to start with; that is a big head start in the benefits box!

Hope you had a good time Michelle.

I think the benefit to men comes from the intimate companionship aspect. I don't mean the physical(however appreciated), I mean the emotional. Men don't tend to turn to their male buddies and talk intimately about things. This forces them to carry their emotions close to the vest, unless they have a close female to share their feelings with. Women may fair better, because of the fact we have an exchange with either our male counter parts, or each other. I don't really know, just a theory.

Hey -- I'm a marriage afficionado. I liked it so much I did it three times. Seriously, though, in my current marriage that is nearly a decade old, I have a situation in which we both definitely look in the same direction and we, I hope, do offer the sort of support your reported studies suggest. I think I finally got it right, but it took a long time.
I do hope your 'wedding weekend' up north was a nice one.

I am not sure I agree with the research. I am convinced my life is now shorter because I got married....(ha ah!)

I've always been intrigued by that research. When I first came across the factoids that spinsters have a greater life expectancy than married women, but that married men live longer than batchellors, it was ok to assume that if someone was in a long-term relationship then it was marriage and that only unmarried women didn't have children. (It wasn't true, of course, but it was an acceptable assumption).

I'd like to know if the reduced life-expectancy for married women at the time was due to the complications of pregnancy and childbirth.

I'd also like to find out much more about the effects of marriage, long-term co-habitation, long term long-distance relationships and short-term serial monogomy.

So many ways for people to get together, aren't there?

But research based on "married" and "unmarried" is frustratingly inadequate these days, and it is such an interesting and important subject.

Thanks for posting about it Michelle.

That should read "and that unmarried women didn't have children".

I'm going to posit another possible reason why men would be benefited. They don't go to the doctor unless their wives nag them about it. :)

Thanks to everyone who posted here - I did have a lovely time at the weekend wedding of my cousin. Thanks for asking David. Peter, we must have been at different weddings.
Q9, jmb, city unslicker, chrysalis angel, ian, simon, ellee and ami - thanks for the comments...all insightful and some with life experience.
aphra behn - the reports don't seem publish the same results for co-habitation... it is just marraige... the debate remains open on reasons why.
Thanks for commenting about this issue.
Michelle