Are you Aware of the Body Hair Correlation? 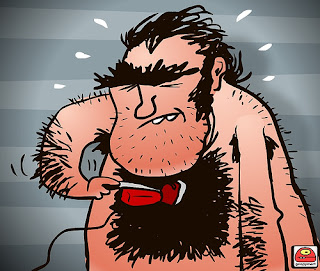 As the weather gets hotter in the UK, one may think that having excess body hair would be a disadvantage, yet in a study published by psychiatrist Dr Aikarakudy Alias, it was found that men with excessive body hair may be associated with higher intelligence.
Alias's research focused on mecial students in the USA, which showed that 45% of male student doctors were 'very hairy', compared with less than 10% in the general population. Further investigations showed that hairer men got better grades when student academic rankings were compared. Alias went onto study 117 Mensa members (who have an IQ of at least 140) and found that this group tended to have thick body hair. In fact, men with hair on their backs as well as their chests seemed to have the highest IQ's within the Mensa members.
But, non-hairy men should not dispair as apparently Albert Einstein had no body hair, and there is no doubting his intelligence.
Posted by Dr Michelle Tempest at 11.4.07

Clever men and lots of body hair...? If they were that clever they would shave it off! Sarah

Well, I have some on my chest but none on my back fortunately (or not as it were!).

And Michelle ... where DO you find these cartoons from!? ;)

I must admit I'm a hairy bugger. I was looking in the mirror in the office toilets the other dayb wondering what the dark stains on the chest of my white shirt were.
There weren't any. It was a thin shirt.
I do have a teeny weeny bit on my shoulders. Irish blood.

Yes I knew there was a reason why I'm so hairy... ;o) Makes up for having to shave all the time.

My husband has about six hairs on his chest, that explains it....

So, that must mean that Robin Williams is an utter genius, not to mention Peter Sellers. One of the reasons Britt Ecklund left him, aside from the fact he was virtually psychotic (albeit brilliant) was his excessive hirsuteness. I'm sorry, but I am just average in the follicles department, so I guess the Nobel people won't be seeking me out.

Well my husband is very hairy bodywise, but unfortunately bald. He was a university professor and pretty smart. My son follows in his footsteps, both body and head, also lots of degrees and smart.
But what about the ethnic groups which have little body hair and still lots of very intelligent people?
A strange study, no doubt funded by tax dollars.
Regards
jmb

BTW I think I know the guy in t the Picture...

Pheeew that's a relief
Though I'm not short on facial hair

Thought I was going to be put on your list of lower I Qs
Fortunately Einstein (as usual) came to the rescue, and saved the day - I hope!

PS - Does that mean Gordon Brown has a higher iq than Cameron, and is higher iq a necessity to lead a country

I fear SoB may indeed have a hairy back, but is clearly lacking in iq

I honestly think there's something in this. My first registrar had a moustache and she is one of the most intelligent people I've ever met...

Ohohohoho...this one gave me a laugh. I will be quoting this a lot (and I mean A LOT) in the future. And to echo David Anthony up there...you find the best pictures, Dr Tempest ;)

I know who Sally is referring to, she is a lucky girl. :-)

I shall tell my husband that. He is getting neurotic about developing hairy shoulders and keeps talking about getting them waxed. I haven't even noticed them.

Actually I remember seeing one of my professors on the beach once and being amazed at his hairiness.

Thanks Sarah.
David - I get all my pictures from google images, but I liked this one.
Crushed by ingsoc - says volumes about your IQ.
Big Brother - glad to have been of help in explanations.
Ellee, mens sana and Ian - thanks for comment.
jmb - a clever family clearly! Brains and body hair.

Simon and Q9 - thanks for the comments.

Thanks The Junior Doc - I hope your week of nights is going OK.

Sally in Norfolk - thanks for the comment and now you can quote that this hair is correlated with intelligence.

Liz - hope your husband finds that information helpful and makes him proud of his hair.

Thanks to you all for commenting on this site... it's been a popular topic!

Actually the clue is in the test group. We are talking Americans here.

If you were to do a correlation with the cultural/racial groups entering Medicine in the US, I think it may be different to much of the rest of the world.

Hi, Dr. T. The correlation seems to work for me: I covered your posting at my weblog two days ago, thinking this was a new study. Is it my virtually hairless back or my weakness for a pretty face that caused me to be fooled? I just did some Googling and see the same story reported on July 12, 1996 in the London Independent, The hirsute of higher intelligence, covering a talk the day before by Dr. Alias, at the eighth Congress of the Association of European Psychiatrists. Well, it's till a fun tale and one that will get pulled out for a smile quite often.

What about hair that grows on the palms of your hands ?

if I would shave my body hair, I would immediately lose my superior intelligence and part of my attractiveness.

maybe the reason more med students are hairy is that this feature reduced their social options during high school and they resorted to studying more...

Alias's research focused on mecial students in the USA, which showed that 45% of male student doctors were 'very hairy', compared with less than 10% in the general population,Its interesting.

However, East Asians tend not to have much body hair. Some Japanese and Chinese guys I've personally known don't even have a single visible hair on their arms, and some even their legs. But they are certainly not dumb.

This only demonstrates that doctors tend to be hairy. Besides, having a good memory is a requisite of becoming a doctor, but intelligence or creativity are not. Furthermore, are mathematicians or scientists hairy? What about certain racial groups, such as the East Asians, who are naturally unhairy?

I have absolutely no body hair, i think i am significantly more intelligent than individuals my age. Asnybody care to discuss a topic??