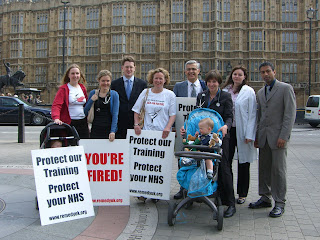 In a brief review of some of the highlights from the Hansard Report:
Shadow Health Secretary Andrew Lansley started by stating his reasons for the debate "First, we want to secure some answers; secondly,... we want to make clear the necessary steps that the Government should accept to regain the confidence and support of the medical profession; and thirdly and not least, we want to demonstrate to the many junior doctors who have come to Westminster today to tell their Members of Parliament of their personal experiences, their disillusionment and, in many cases, their anger at what has happened to them…” He went on to quote from a junior doctor, who I know to be an excellent doctor, and described his experiences: “I have a first-class degree in medicine/neuroscience, medical degrees with distinc 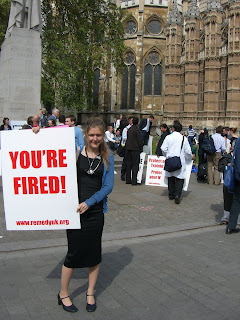 tion, two research doctorates . . . in behavioural neuroscience, nearly 30 scientific publications including text books and commercialized research software, research prizes, three years’ experience as a lecturer in neuroscience at the University of Cambridge, and two years’ experience as a medical SHO at teaching hospitals . . . whilst I was short-listed for an ST2 medical position I failed to be shortlisted for ST1 psychiatry, which requires no previous psychiatry experience." He continued with “The consultants at Addenbrookes in my constituency sent me the results of a consultant survey that they had recently undertaken, and three quarters of those consultants said that they would refuse to take part in further interviews. Ninety-seven per cent. of them wanted to see the previous system of appointments restored for this year. I do not necessarily agree with that. However, there is something that we can and must do between now and August. It is not good enough to wait for Sir John Tooke’s review in order to produce a report in September.”

Henry Bellingham MP highlighted that “doctors are worried that they will not receive sufficient training under MMC. For example, orthopaedic surgeons received 22,000 hours of training under the old system, but they will receive only 6,000 hours of training under MMC.” Norman Lamb MP poignantly stated “What will happen on 1 August?” and continued by calling modernising medical careers “a straitjacket.” He highlighted that warnings “went unheeded. The Royal College of Physicians warned but was ignored. The British Medical Association said that it tried to get the Government to listen, but it was ignored.”

Then it was over to Mrs Nadine Dorries MP to lighten the mood and recount the words of Dr. Sonia Heyer: “As a junior doctor who may be unemployed this summer as a result of the present recruitment fiasco, I was delighted to learn that we may be required to seek employment with voluntary services overseas. I would go, provided I could secure the company of the present Secretary of State for Health, in which case I would gladly accept a mapless mission to the Amazon jungle.”
Finally, perhaps it's also worth mentioning that watching from the gallery, Patricia Hewitt was observed to shuffle once in her seat, and it was to these words from Andrew Lansely "The review still has serious problems and it will be subject to legal challenge."
Posted by Dr Michelle Tempest at 25.4.07

Doctors should not have to be activists like this, it is appalling. I am in awe of people like you and Mens Sana who take the trouble to tell the public exactly what it is like. Nadine Dorries was a nurse too, and Andrew Lansley comes from a medical background, you couldn't have better support.

Thanks Ellee. Doctors are not activists by nature, and their rule "first do no harm" is something which needs to be listened to... the changes proposed will harm patients. Therefore, doctors have been forced to stand up against something the majority believe will be detrimental to patient care. Thanks for the comment. Much appreciated. Michelle

Well, gee Michelle, don't hold back ... why don't you tell her what you really think! Nice placard... ;)

I'm sure a lot of junior doctors across the country who don't know about your blog or efforts would like to thank you.

lol Michelle, by enlarge
I'm sanguine, cold blooded and pretty unsympathetic about doctors and the medical profession.
But you've certainly managed to melt this cold heart.
If I were a government minister or the minister for health, I'd be unable to resist all your demands.

Thanks David - I did not even try any Freudian stuff there!
Thanks Quasar9 - that means alot, especially coming from you. I wish you were health minister. Many thanks for listening.
Michelle

Patricia Hewitt was observed to shuffle once in her seat, and it was to these words from Andrew Lansely "The review still has serious problems and it will be subject to legal challenge."
Could this be because she is beginning to realise that being in constant denial does not excuse gross negligence nor crass stupidity nor incompetence.
How do psychiatrists define this condition of living in a political dream world?
Do sufferers ever face reality?
Is there any cure or better still prevention?
Curious Ex-Pat.

Thanks Curious ex-pat. I don't think it takes a psychiatrist to work this one out. In the final days of the Blair reign, he needs to act. Thanks, Michelle

I agree with Ellees comment although the girl with the"Your Fired" banner looks like she is enjoying herself... ( perhaps a bit runcible?) (smile)

If you accept a system where all doctors have to train and work for the same meployer, then you have to accept that when the employers messes up, everybody is going to go through the same hell.

When the single employer in question is the state, then can you expect anyting other than chaos?

That is why an insurance based system like France or Germany works so much better. There is a choice of employers and the "profession" is in charge of teaching and training, not the state.