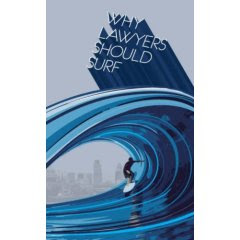 Today the Times newspaper reported that lawyers are being encouraged to take 'time out' in The Priory, usually well known for their high profile clients. A book entitled 'Why Lawyers Should Surf' co-authored by myself and barrister Tim Kevan is a self-help book aimed especially at lawyers, after several studies have cited that lawyers suffer from an above average rate of low mood. An extract from the book is given below:
"In the early 1990s a John Hopkins University study compared the rates of depression among one hundred and four occupations and found that lawyers were nearly four times above the average rate of depression. This then begs the question ‘why do lawyers have such a high level of depression’? There are several hypotheses for this, well beyond the explanation that law is a stressful and busy job.
Professor Martin Seligman argues that the key thing about lawyers is that they tend to have pessimistic personality types. When lawyers are asked the famous question: ‘Is the cup half empty or half full?’ most respond by saying 'half empty'. This somewhat pessimistic response may be a distinguishing advantage within the legal profession, because viewing troubles as pervasive and continuing, is at the very heart of being a prudent lawyer. The inherent and honed ‘scepticism skills’, enable the lawyer to see every conceivable hiccup or catastrophe that might occur in legal transactions. Therefore, the ability to anticipate any pending or possible snare or disaster gives a positive legal outcome, as the lawyer can then help clients defend against potential negative eventualities. Hence, ‘pervasive pessimism’ and possibly ‘catastrophizing’ can be seen as a powerful legal tool, helping to anticipate disaster, and encouraging lawyers to think the worst before it has happened. However, on the flip side of the same coin, is that if you take that same pessimistic mindset home with you from the office, it may form part of the answer as to why lawyers are more likely to suffer with low moods.

Another hypothesis is that lawyers tend to express ‘high-dominance’ as a key feature of their personality; again something which aids successful legal careers. Key features of a ‘high-dominance’ personality include people who: interrupt others, talk longer, take charge of conversations, decide when to change topic, state strong preferences and opinions, have an unyielding manner and tend to enjoy giving instructions and advice. ‘High dominance’ personalities also tend to believe in statements, such as, ‘winning is more important than playing the game’. This may be an integral part of being a successful lawyer who never looses a battle, however, when this is mindset extended outside the workplace it fits less well with the challenges of daily life. When things have not gone the way high dominance personalities have planned, it can be a time when they struggle to manage or cope on a psychological level.

A further hypothesis is based on the accumulating psychological evidence that much work stress arises from interacting with people rather than things. In fact, ‘emotional labour’ is more mentally taxing than the old fashion labour jobs that were more physically taxing. It has been shown that the more your job requires you to fake emotions, the more emotionally detached you become from those around you. Hiding or faking emotions, can lead to ‘clinical burnout’. Since lawyers keep a professional detachment from their cases and cannot get too emotionally involved, this could potentially lead to the burnout state of mind. Burnout can result in symptoms of emotional exhaustion, fatigue, detached attitude towards others, low sense of effectiveness, helplessness and also low mood.

The risk of the inherent pessimism means that lawyers should be especially careful not to extend the negative mindset perspective into other areas of their lives. This book will hopefully assist the reader in finding perspective, so that even during the most difficult times in life a context can be found, which can also provide something to learn and grow from. As Shakespeare said, “There is nothing either good or bad, but thinking makes it so”.
The book can be pre-ordered on amazon here
Posted by Dr Michelle Tempest at 30.4.07

I've ordered my copy, but I think doctors may be at even more risk of depression that high earning lawyers... Sarahx

Good luck with the book.

Isn't that odd. I saw a photo of the cover in the Observer (I pick up the weekend UK papers here in Canada just to keep in touch since I have spent so much time over there)and was struck by the graphic (which I love), and didn't pick up on your connection with it. That's wonderful. Now I want to read it.
Cheers,
Ian

The book sounds great, I didn't realise lawyers had such a depressive background. I shall buy myself a copy too, what a star you are.

I have pre-ordered a copy of the book, can you tell me the publication date?

whoops-having read your character summary I'm worried I might be a lawyer after all. Is it too late to train as a coroner?

This does not bode well for lawyer/politicians I feel.
Although they may just be depressed having colleagues like Hewitt.
Curious Ex-Pat

Much food for thought there, Michelle. Interestingly, the partner in our practice who gets far more stressed than anyone else has a pessimistic approach to medicine. They know that the sky is just about to fall on their head, constantly seek advice from secondary care (with notes piled high in their room awaiting a call-back), and painstakingly go through all correspondence and lab results. I take a more optimistic and laid-back attitude: I am certainly less stressed and my patients don't seem to come to harm as a result.

And I agree that interacting with people is stressful, as I mentioned in one of my postings.

Thanks Ian and Ellee - the book should be in shops end of July/ start of August... basically nearer the end of summer.
Mens Sana - I remember one of my friends telling me that they would never invite me to dinner parties if I became a coroner... if it has this effect on everyone, then being a coroner sounds lonely work!
Thanks Dr Andrew Brown - I'm off to check out your link.
As for Hewitt - I'm not sure there is a cure for her.
Many thanks to you all for leaving comments, they all made me smile, so thanks to you all.
Michelle

do you have a book for auctioneers? :o)

Brill - have ordered one

I'm a lawyer. The description sounds exactly like me and also decribes the problems I've bene having for the last few years. Hopefully the book will be able to help.
Thanks in advance.
Adam.

Sorry Simon, the book is for lawyers - but alot of the tips are more general.

Thanks Adam, I also hope the book will help.

Thanks to all the commenters.

Thanks for interesting article.

Thank You! Very interesting article. Do you can write anything else about it?

Very interesting site. Blog is very good. I am happy that I think the same!

I see first time your site guys. I like you :)

Zk0n98 You have a talant! Write more!

3stoCR The best blog you have!

I'm an aspiring lawyer . I'm starting to read the book and so far it's really good.

interview answers to get a job,

beach resort in the philippines,

great beach resort in the philippines,