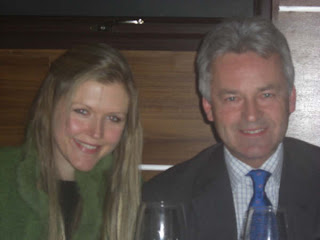 Alan Duncan today announced that Regional Development Agencies (RDAs), are evolving into an executive arm of government instead of being “a business-led force for good”. He fears RDAs have become “increasingly politicised” and that the government’s plans to give them strategic planning powers is “a huge mistake...ingraining a tier of regional government with no mandate, no legitimacy and no accountability”.
To me RDAs sound like yet another unaccountable, unelected, undemogratic quango. Perhaps it's worth remembering that the Labour government spend more on quangos, than on our own armed forces.
Posted by Dr Michelle Tempest at 30.6.08 2 comments:

Gordon Brown celebrates 60 years of the NHS.
Check out this clip - a must see episode of Yes Minister with a hospital full of administration but no patients. Is this an example of life imitating art?
Posted by Dr Michelle Tempest at 29.6.08 1 comment: 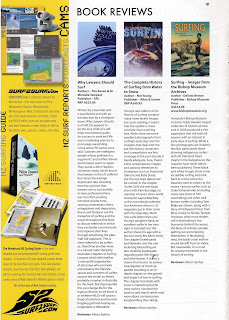 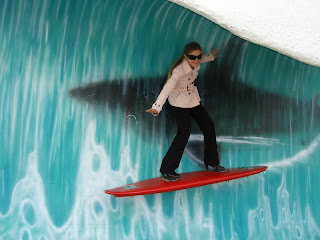 The book 'Why Laywers Should Surf' was reviewed this week in surfing magazine Drift.
Posted by Dr Michelle Tempest at 26.6.08 6 comments: 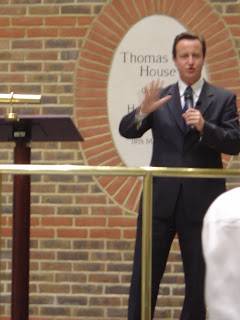 Yesterday I was at Guy's hospital, celebrating 60 years of the NHS. David Cameron spoke about how the Conservatives were going to reduce targets and focus on outcomes. He also gave a personal account of how his son Ivan has frequently used the NHS and how grateful he was to the hard working health professionals.
Posted by Dr Michelle Tempest at 25.6.08 No comments:

Today I started my day by buying breakfast and a latte in local coffee shop. A pleasant young lad served me and said “£6.50 please”. I handed over £10 and then gave him another 50p. The extra change made him look nervous, and he called over to the girl making the drinks. He said, “So, how much change do I give?” The reply “£4” was spoken in a Polish accent. Has anyone else experienced a similar situation recently?
This simple but telling interaction is on the same day as Sir Peter Williams, (chair of the ‘Government’s Advisory Committee on Mathematics Education’) expressed concerns over how poorly equipped primary schools are to teach maths. He raised concerns that a quarter of eleven year olds are failing to meet the expected standards of numeracy. He highlighted the importance of combating the “can’t do” attitude to mathematics that appeared to be unique to Britain.
I concluded this morning that Poland must have a “can do” mathematics attitude and wondered if we need to open the doors of his proposed ‘summer mathematics courses’ to all the children who were educated during the last ten years of Labour administration. Their slogan ‘education, education, education’ seems to be over ten years behind schedule.
Posted by Dr Michelle Tempest at 17.6.08 13 comments:

Today I wrote a piece about Polyclinics over at Conservative Home.
Posted by Dr Michelle Tempest at 14.6.08 6 comments:

This clip is of Mr Djemil who will launch a blistering attack on current drug prison policy on Monday. This is his first ever television interview where he says that drugs in prisons are "everyone's problem and no-one's priority". Lets hope everyone can make it a priority to tackle the drug problem within the prison service.
Posted by Dr Michelle Tempest at 8.6.08 4 comments:

The other day I had the pleasure of meeting fellow blogger Ellee Seymour. I’ve always been a fan of her blog and she’s even more delightful and kind in person. Today she reports about the state of mental health provision.
Posted by Dr Michelle Tempest at 6.6.08 4 comments: