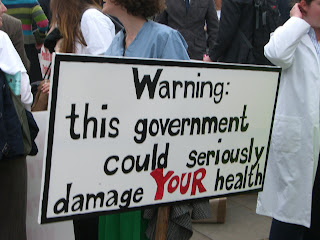 Today was the mass medical lobby at Parliament. It started with a rally outside the House of Commons with cross party speakers (Conservative Andrew Lansley, Lib Dem Norman Lamb and Labour Ian Gibson), the RemedyUK organisers and hundreds of doctors from every grade. 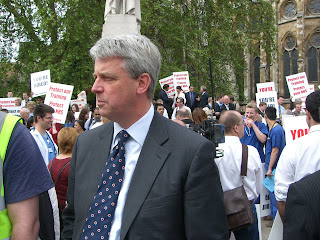 romised if consultant doctors have not been given enough time to train within their chosen specialty (training time to become an orthopaedic consultant surgeon has been cut from 22,000 hours to a mere 6,000 under the propsed MMC).

Previously this blog has written about the thoughts from three eminent consultants, and today there was a debate in the House about these impending changes. Andrew Lansley suggested that Patricia Hewitt was in "denial" about the scale of the disaster created by MMC and her "chronic mismanagement". He went onto highlighted that she has scheduled the 'second MMC review' to report in September. However, as 1st August is the key date when doctors start new jobs, such a review date is too little, too late.
Posted by Dr Michelle Tempest at 24.4.07

Good to see you there. Sarah