What Kind of Man is Gordon Brown? 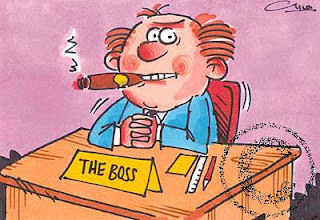 Whilst the United Kingdom await their new Prime Minister, many people are pondering about what type of man Gordon Brown is, and what makes him tick. With this in mind, over the next five days I’ll summarise the types of men psychotherapist Bethany Marshall has identified in her new self-help book entitled Deal Breakers. She believes that there are broadly five different types of men. By the end of the week people will be able to vote on whether Gordon Brown could fit any of these stereotypes.
Lets start today with:
1) The Man in Charge
First impressions: He is admired as one can rely upon his help
Warning signs: He feels mistrustful towards people not under his control.
He may get be concerned if private e mails or conversations are held without his knowledge.
He believes that without his help one cannot succeed in life.
He questions decisions made by others, and offers his own advice.
He gets annoyed if you don’t follow his advice.
One or both of his parents may have dominated him as a child.
He is proud of his own refusal to give in/ inflexibility.
Over the next few days the other choices will be:
2) The Scriptwriter
3) The Man Without Fault
4) The Invisible Man
5) The Little Boy
I shall await the readers verdict with interest!
Posted by Dr Michelle Tempest at 6.6.07

Hi Michelle - do I really have to wait for the rest of the week to find out the other 4 types of men? I guess Bethany Marshall has not written a book about the different types of women, as it would be many volumes!
Sarah

I think, we shall all end up converging on 'Little Boy'.

Brown is not a leader, as e shall see.
For all his many faults, blair was that.

That sounds like Tre in The apprentice! Although first impressions of him wouldn't have been favourable.