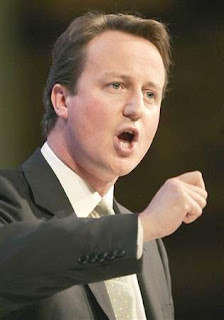 Today I was in Tooting listening to David Cameron give his keynote speech. He described how the re-building of the Conservative Party was well underway. David Cameron used the well-known house analogy, explaining how the centre ground had been prepared, foundations completed and it was now time for the exciting part - watching the house take form, laid brick by brick.

It was a great speech and addressed a wide range of topics with the central theme of social responsibility. It was good to hear a father of three (the day after father's day) talk about the family as the cornerstone of society, suggesting that "It is simply no use talking about opportunity for all unless we give every child in our country the secure start in life that comes from a stable, loving home.”
And it wasn’t just David Cameron who spoke today, there was Philippa Stroud explaining the background to the ‘social justice policy group’, Grant Schapps with his enthusiasm for local communities along with Francis Maude, Mark Clarke and Michael Gove. Overall, David Cameron's speech was a breath of fresh air for the political arena; it was clear he is not going to be building a paper house to be blown in any direction, but a brick house built for the future. The full pdf of his speech can be read here.
Posted by Dr Michelle Tempest at 18.6.07

Thanks for the information Michelle. At least he was their for the junior doctors in their time of need.
Sarah

I am the first to admit the Mr Cameron is very "nice" and is very well-meaning. But do you think he's got what it takes to get a grip on his party when the inevitable controversial times and divisions arise?

10 years ago we enthusiastically voted in a PM who was (and is) excellent at delivering speeches.

Heartening to hear the right emphasis but I'm keen to see how this will translate in to manifesto/policy decisions.

David Cameron is a great speaker and I very much like his line on social responsibility. Grant Shapps is very talented too.

Maalie, everyone makes mistakes and learns from them.When you are a politician, they are very public mistakes. Hopefully, lessons can be learnt from them.

I woud say Cameron is a great speaker Ellee. His certainly very good. Great speakers are a rare breed.

The All Seeing Eye said...

What's with his right hand copying what Pres Clinton used to always do? That bent forefinger?...