Are you Sure you want to Follow the Yellow Brick Road? 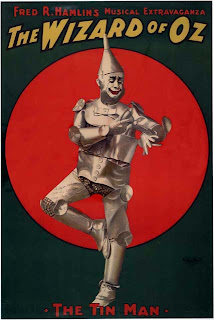 Patricia Hewitt told the House of Commons today that the security breaches in the doctor job application system, which leaked highly sensitive data such as sexual orientation and criminal records, were "utterly deplorable". Andrew Lansley said that the medical profession had lost confidence in her and junior doctors wanted her to resign. He continued "She is not going to go but the next prime minister ought to move her. I hope he does." For the BBC story read here.

Patricia Hewitt perhaps wants to be remembered as ‘the iron lady’, refusing to back down on the shambolic process of modernising medical careers. However, it may be more fitting to remember her as ‘the tin man’. Only a woman without a heart could continue with such a system that will endanger patients under her ‘modernising’ regime from 1st August. Tony Blair and Gordon Brown be warned - following that yellow brick road has no happy ending.
Posted by Dr Michelle Tempest at 1.5.07

what is sad is.. its the same here.

today on the ABC we had doctors being interviewd as to why they are leaving the rural areas.

They said that the equipment in the hospitals was not working and that they were short on basic ( eg bandages)!

They also said they were on call 24/7 without replacement, and that they can no longer work under these conditions...

Not that I have much time for her, or the remnants of the Cabinet, they've long gone past the point of no return.

But I've yet to hear one policy from Andrew Lansley that's going to make health care any better.
Sure we'll pamper to the needs of the better off and those who can pay - and continue to use the nhs patients as guinea pigs - for junior doctors and dentists to practice their surgical skills and to "cut their teeth."

But the bottom line is doctors and dentists want the £90 billion nhs to keep them in the manner they've become accustomed to - and then to charge patients for treatment.

That is the malignant cancer in the health care system, it always has been. Labour couldn't remove it, and conservatives thrive on it.

Selling fear of illness & disease
Selling promises of miracle cures
Cures which you then can't have unless you can pay. Brilliant!

Talk about Blind Faith!
Talk about leading the bling off a cliff

Is the MTAS website still suspended? This can only make matters worse as August arrives... now they have no job and no application process to find a new one.

In other words (with apologies to EJ)"It's good-bye yellow brick road.)