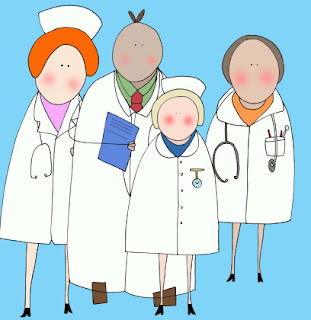 It has been said that doctors are not very politically savvy as professional group. However, when the government announced their ‘Modernising Medical Careers review result’ exactly 24 hours before the long Easter weekend, I heard many doctors asking about 'a good day to bury bad news' and 'the political theory of spin'. After all, the day before a long weekend is inevitably extra busy in any job; and especially so in hospitals, as patients get reviewed prior to a bank holiday. News releases about work have a tendency to loose impetus as people relax with family over the long weekend. However, have spin doctors underestimated the profession? NHS doctors are used to working over national holidays. This has been evident in the response released by RemedyUK, who have posted that they remain “committed to representing UK doctors and will release an up date on the legal challenge later today.” (and yes, today is a UK bank holiday)

Other MMC news includes the resignation letter from Professor Shelley Heard who stated “… somehow we have lost our way. The high principles of MMC - patient safety being at the forefront of all we do; trained doctors delivering most of front-line care; improved supervision and accountability to allow doctors in training to gain in their skills and confidence – have been lost in the detail and acrimony of a recruitment process which should have supported and not driven it.” She continues “I believe that we need to step back and reassess where we are going. The Review Group has not done this strategically or with an eye to the future.”

The review has been published and the battle has begun:
SPIN DOCTORS V JUNIOR DOCTORS.
Posted by Dr Michelle Tempest at 6.4.07

Are you challenging Ms Hewitt to a friendly boxing match? ... for charity of course! ;)

Where do you actually stand on this, Dr. M?

Thanks David. RemedyUK may be interested for their charity.

Thanks James. If it were up to me (which it isn't), I would say the issue needs to become much less complicated. For those who have already been offered a job, those offers need to be honoured. However, from there the system should have been scrapped until it was 'fit for purpose'. This is not to say that the old system could not be improved upon, but the profession should be allowed to train their own juniors and the juniors need to be listened to. Don't forget they asked to "be treated like human beings"... it should not have been a big ask. Hope that answers your question. Michelle

Oh dear, that is certainly bad planning from the communications point of view. et's hope they don't make the same mistake again.

Have a very happy Easter, btw.

Hi Michelle,
doctors have never needed to be politically savvy because any government feared a strike by doctors - they migh guffaw at nurses or Unison striking - but even Thatcher would rather take on the miners (men with balls fighting for their careers & jobs) than see even more patients have their appointments cancelled, and waiting lists grow because of 'go slow'action by doctors unions.

Incidentally Michelle,
has anybody stopped to work out that if we hadn't given GPs the ridiculously 30% pay rises to work even less (reduce their hours) -

we could have reduced GPs hours, and used the 30% pay rises to employ more doctors in hospitals and health care - without adding more burdens to rising NHS costs.

Have a nice easter break!

Thanks Ellee - 'a mistake' is one way of putting it. Tactics is another.

Q9 - Thanks for joining the debate. The one thing any government should worry about is 'will doctors or nurses strike?' - the answer will always be 'no', as patients are always put first. However, when 12,000 doctors take the the streets to protest... that was medical history.
As for GP's, it is thought that the new training scheme will continue for GP's, but will not be accepted for hospital doctors. When the government offered GP's new contracts they underestimated how hard GP's were working.
Hope you have a lovely Easter. Michelle

It certainly answers it and thanks. by the way, if you have a moment, check the current Blogfocus.

Forgot - have a happy Easter too.

Thanks James - I shall certainly check out blog focus, thanks for the tip. Michelle

Hi Michelle - hope all is well - please could you visit an embryonic project at www.ghostcabinet.blogspot.com. We are looking for a blogging health professional to join our team. I think you would be ideal, so please take a look. Even if it's not for you, maybe you can suggest a blog doctor that we could approach. Mail me at praguetory@googlemail.com if you want to find out more. We are planning to launch in mid-May in the aftermath of the local elections. Thanks PT