Who can you Trust? 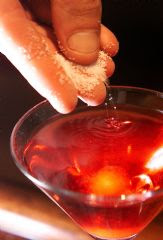 It was reported today that a city business man was jailed for just two years (instead of a possible ten years) for spiking the drink of a female banker. The offence was noted by an eagle eyed waiter who spotted the banker's slight of hand into her drink whilst the female banker had gone to the ladies; she was thankfully alerted as to what had happened.

This is an extreme criminal case, but just how good are we generally at spotting deception? Research would suggest that people are not as good at spotting deception as they would like to think they are. Indeed studies show that people can detect lies in others at a rate of only 44%. This is actually lower than the success rate you would get if you tossed a coin! Even professionals who are meant to have a lot of specific experience in this area, like police officers and customs officials, perform no better at lie detection than at the level of chance.

In one famous experiment police officers were exposed to videotapes of people who were asking the general public for help in finding their missing relatives. Some of these people had been found guilty of crimes against their relatives, but police officers didn’t know this. What was found was that none of them performed any better at spotting deceit at the press conference than could be expected by chance. The psychologist Professor Aldert Vrij from the University of Portsmouth, who conducted the experiment found that the only professionals more adept at spotting deception than the general public were officers who worked for the US Secret Service – but then again they tended to trust no one at all!

One explanation as to why professionals are no better at detecting lies than the general public is that they are burdened with the same false beliefs about how liars behave. For example, it is commonly assumed that liars have key non-verbal behaviours, such as gaze aversion. This preconception remains, despite psychological research which has established that this is not a reliable indicator of deception. In fact, the opposite may hold sway, because liars have to manufacture reality, and this usually requires a lot more intellectual effort than simply reporting the truth. As well as watching their words, liars tend to closely monitor how their story is coming over, hence liars tend to watch the listeners closely rather than look away. Therefore, perhaps someone who maintains more eye contact than usual, is the person to be concerned about. Also, good liars tend to make fewer gestures to try and ensure that they don’t ‘leak’ body language clues.

It is said that a useful tip is that liars experience three main emotions during lying: fear of being caught, excitement at the opportunity of fooling someone (‘duping delight’) and guilt. Hence by being vigilant for these emotions, you are supposedly more likely to spot them in the form of ‘micro’ expressions – facial movements that appear for short periods of time and betray these emotions. Unfortunately, these expressions are usually barely perceptible.

So, beware of preconceived ideas as to who is telling the truth, and always be aware of the dangers of leaving your drink unattended in a public place.
Posted by Dr Michelle Tempest at 2.3.07

I don't believe you.

David - perhaps you are thinking of joining the US Secret Service! Thanks for the comment. Michelle

I do believe you because as a teacher I've seen cases of students lying so convincingly that they come to believe their own lie. When confronted with irrefutable proof of the lie (such as a parent) they will argue with the parents, teachers and anyone else that they are wrong and the student's version is right. They seem to be living in a reality all their own. Weird!

thanks big brother - I don't think teachers were part of the study - perhaps they would have been the most skilled at telling the difference.

Wow! thats interesting. I have a pretty good memory, so someone lies to me, (in business), I usually remember.I always thought I was pretty good at reading body language too.

Anyway, with regards to weak men who do this ( spike drinks) they should get the full measure of the law... its such a morally disgraceful act, done by men who are weak.

Michelle I am enjoying your blog..thanks!

I found this a fascinating posting and it casts a lot of previously held concepts to the winds about shifty-eyed liars, etc. I wonder if one of the reasons many of us are duped is because we are a bit innocent and altruistic and tend to not believe somebody would 'stoop that low.' I found that in working with addicts their lies were often amazingly inspired and even when caught out they would accept they had been seen through and show no remorse.
A colleague used to say to addicts: "I know you're lying, your lips are moving."

I wouldn't want to be married to a psychiatrist! You'd never get away with that quick pint whilst going for the paper, and things...

Dr. Michelle - if I were asked a pointed question by someone I knew who maybe wanted a reassuring answer from me, even if it were only to say "I do" to reaffirm my concern for them - I would most definitely make eye contact because I would want them to see my concern for them in my eyes.

Conversely, If I posed the same statement to them and if at the point they said "I do" to agree with me but looked down for the couple of seconds it took them to say "I do" and then they looked up at me, I would tend to think they weren't being truthful.

What do you think? Unless maybe they are feeling awkward? Very interesting. I always thought that the directional gaze of ones eyes determined the validity of what they were saying.

Hi Michelle, I'm curious though
These date rape drugs, how do they work. I mean I know trying to get a girl drunk is as old as alcohol. But trying to get a drunk girl yo your apartment or hers isn't that inconspicious, taxi etc ...
Does a date drug give you a willing sleep-walker, I'm asking because I'm generally curious how it affects women )and people in general).

Of course alcohol removes inhitions, and some inehibriated girls simply do not have the will to say no (supposing they wanted to). Is it meant to be the same
with date rape dugs? - but without the likelihood of vomit from the drunk person?

PS - On Lying
There is deliberate lying, seeking the thrill of duping another, or simply avoid being caught
There is lying in error as when someone asks directions, and one tentatively gives the wrong information in error
There is lying thinking one is right, as in what we perceive as knowledge or 'rightness'

There is the metaphorical lying or telling tales (story telling) such as Santa Claus or Peter Pan.
Harder for a child to know what is 'real' and what is not, harder for an adult who has experienced betrayal to trust lovers or partners

Maalie:- I went out with a Psychiatrist, but she only wanted me for my mind.

Then I went out with a chiropracter:- but found her too manipulative.... (ha ah!) :o)

I skimmed over that study about a week ago. I could've sworn it said it's other law enforcement and not the Secret Service that don't trust anyone. I believe it also said that the SS (hm, bad acronym) regularly deals people who threaten public figures, and that most of these threats are bogus. Thus they must determine the veracity of most peoples' usual defense that they weren't serious, and most of the time decide they are telling the truth.
Unfortunately, I can't remember WHY they hypothesized that the SS was so good, other than the microexpression detection.