Cartoon interviews...Are they on? Yes and No 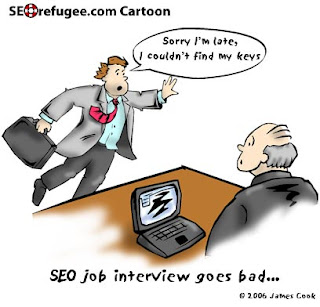 The following offers a small round up of comments about the changes in medical training, from medical Royal Colleges and blogs:

“We are saddened to see that in some schemes only 6% of existing trainees have been short-listed, in spite of the fact that they had previously been interviewed and selected for the jobs they are doing.”

“The College can report instances where the technology for referees has not worked, despite repeated emails and calls to the helpdesk. For instance, referees have not been able to click answers which say ‘yes’ as to whether they would employ a particular trainee; they could only click ‘no’ in response to the question “would you employ this applicant?”.
Royal College of Psychiatrists

“Although many good doctors have been short-listed, we are dismayed to learn of the exposure of serious weaknesses in the Medical Training Application Service, through which doctors are now selected and placed for specialist training. We see a crisis of confidence in this critical element of the new system.”
Royal College of Surgeons

“The row over training of junior doctors intensifies as more senior consultants decide to boycott the interview panels.”
The Telegraph
An email was sent to Dr Crippen from a senior consultant anaesthetist:
"We were very concerned at the many irregularities of procedure and process that took place during shortlisting.…We are therefore decided that we should no longer continue with the present round of interviewing for anaesthetics…There have been a series of serious procedural errors during the process: 90 applications were ‘lost’ from the original boxes, due either to a Deanery error or an MTAS ‘black-hole’…Most of us had 48 hours in which to carry out shortlisting of up to 650 applications.”
For the full e mail see Dr Crippen, NHS Blog Doctor
"We have a monopoly employer which decides that all junior doctors should cancel their lives for a couple of months (and if they don't, tough sh*t, game over) and they tell us we're making a choice. Can it get much more ridiculous? Yes, I'm sure it can, and will."
Hospital Phoenix
So, in summary, some places are going ahead with round one interviews, but not in others. Round two interviews will be going ahead, but with a more traditional meritocratic CV application and with "significant" changes. To all those enduring the interview process; you may have an interview, it may or may not be going ahead, and there is always round two to look forward to... good luck to all.
Posted by Dr Michelle Tempest at 10.3.07

I did not get a round one interview.... I thought I was one of the unlucky ones.... now I am feeling my luck has changed and I am pleased to sit and wait this round out. Thanks for the interesting round up Michelle! Sarah

I suspect round 2 will be good... and that the round 1 interviewees are the unlucky ones!

Thanks for the mention!

Your response gave me an idea for a post request. At some point in time could you please do a post on the dynamics of transference and counter transference as it relates to doctor /patient care/relationships for both the psychology/mental health field and the patient with physical ailments under the care of the family physician, etc.

I remember hearing about this years ago and find it to be a fascinating concept. My "limited" understanding of this is that people have unresolved issues in their past that they transfer onto the people that are they are helping or who are helping them. But it is not real - it is only withing the context of the environment and that indeed, outside of that quite possibly nothing would be in common.

In counseling a certain amount is good because it opens the doors to trust?

Could it also be a professor/mentor student situation s well?

And are there cases where evil people transfer their rally bad issues onto unsuspecting people as in rapists and serial killers, etc? Or is that a different kind of transference, if even that in the first place.

The mind IS fascinating!

Have a beautiful day! :)

well done michelle with this issue. you have put a comprehensive and powerful case and i am very grateful for you speaking up

Thanks sarah and Hospital Phoenix - may I wish you every luck with your interviews.

Thanks for comments
Michelle

Transferrance is when you relate to the clinician as though they're your mother, isn't it? Not that you think they're your mother, but you relate to them in that way because of some analogy in the relationship. And counter transferrance is when the clinical relates to the patient as though they're his/her child? or something like that... [/ignorant surgeon]

Believe it or not, I was really very interested in psychiatry back in my medical student days...

the interview process, is it an IT problem?

I find this blog facinating!.Its no wonder my doctor is cynical, if this is what happens behind the scenes!

I believe that one interview panel in Birmingham has walked out in protest.

I don't understand how some places are continuing with round one and others not. It just makes the whole process look even more shambolic.

I love your blog by the way and have added you to mine. Hope you don't mind. B

They are only a number on a form
and the chart or medical history is down to
1) Repeated notes handed down - you know they could be in error.

How about looking at the patient to see if the notes are correct, before expecting the patient to comply (or fit the bill) according to the previous doctors notes.

You know the best way for hospitals to keep the number of complications and complaints on record to zero.

Sweep them under the carpet
If there are complications - dismiss the patient - as treated satisfactorily
The patient has to find another hospital to deal with the complication - where he is rehistered as a new patient.

Hence no record of complications further to treatment in hospital 1
And no record? of previous history at hospital 2

quasar9 very cynical. I have to say that every time I ask a patient about their history they look at their otes in front of me and say words to the effect of "isn't it in there?", so it cuts both ways

Simon, Peter, Bryn, Quasar9 and mens sana, thanks for your comments and for joining in the debate. Changes seem to occur on a daily basis, so it'll be interesting to find out what next week will bring. Thanks again. Michelle

I have no doubt there are genuine people in the medical profession too
After all not all plumbers and builders are cowboys, or we'd all be living flooded out and crumbling houses.

But the fact that some patients expect the doctor to know what's wrong with them, and have blind faith in what is in the notes

Does not mean ALL patients are unable to express themselves, and some are rightfully bemused by the notes written by 'some' doctors.

In the real world - I have yet to see any evidence in dentistry that dentists or oral surgeons care much about the patients teeth. It is about how much they can charge.

Incidentally the other Myth is that if somehow you can pay you get wonderful dentistry. Wrong again, if you can pay you get access to 'private' dentistry which is better than no dentistry.
But in the 21st Century dentists are still not trying to save teeth or repair teeth, but processing patients - and providing minimal service for highest return. Dentistry is overpriced. If a patient needs time consuming surgery - the dentist wants very high hourly rates. And the nhgs will not pay - end of story!

Anyone who loses their teeth except thru accident or trauma, is losing their teeth thru inadequate oral hygiene or disease for sure, but mainly because of late or inadequate and incompetent dentistry.

We all know if you can service and maintain your car 'properly' it has a better chance of lasting. But we expect more from our cars and motor mechanics and higher standards from toys manufactured in China, than from dentists and dentistry - it seems!