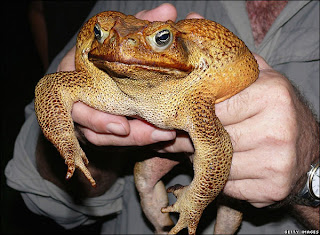 It has been reported today that a giant cane toad, the size of a small dog, has been captured in northern Australia. This giant toad, weighing almost two pounds, has been given the nickname ‘Toadzilla’.
Environmentalists have been trying to stop the spread of the poisonous creatures across the country's tropics. The toads were introduced from Hawaii in the 1930s in a failed attempt to control native cane beetles. However, they have had a more widespread effect on other animals, and have poisoned countless native animals, including crocodiles and small marsupials which have died after eating them.
Posted by Dr Michelle Tempest at 27.3.07

Or should that be Croaky!

Didn't toads get a mention by Al Gore too? Australia has really had a bad time with climate change, I'm sure Simon will know all about this if he catches up with this post.

And of course when they were introduced to Hawaii (my favorite place on the planet)a couple of decades earlier they had an equally devastating effect on the environment there. You'd think they'd have learned.

Let's see if I get this straight: there was a cane beetle that was a problem, so they introduce a large, poisonous frog to eat said beetles. Do they even eat cane beetles?

Dr Dork has already said what I came to say about the rabbits, which caused such havoc.
Although the eucalypt trees went from Australia to Sicily and caused great problems there.
Regards
jmb

And still we persevere with GM products.

cane toads are way horrible and great for learning how to raod run, they are dangerous and mean and yuck

Liz, Your arguement is a fallacy!

Toads were introduced in the 1930s (from memory) to counter the effect of this cane beetle.

Today the toad exists across the "Top End of Australia and as far down as the NSW border. They are heading for the Kimberly region to the west. It will not be long before they will be across the entire continent.

My mother ( as an example) has a toad trap in her back yard which she empties every day, many people do. If not , her dog may become ill and die from the toads. She lives in the suberbs of Brisbane an has had her dog to the vet a number of times...

In the Northern territory they have "toad cleaning days" where entire townships spend the weekend removing 10 of thousands of toads.... (A bit like collecting aluminium cans from road/toad sides)

We raped this country. :o(

There are no predators, chemical, or virius that can kill the toad. It lives in very sensitive wet lands, and can move vast distances in floods. As Jim said 'Simon I will give Australia 50 years before your agricultural industry will be "rooted"..

I think he is right!

tca, I know what a fallacy is but I'm not sure how you think it applies to my argument!