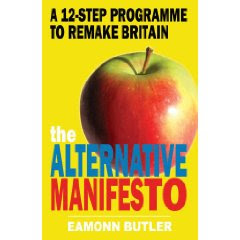 Eamonn Bulter wrote a chapter in 'The Future of the NHS'. His new book is entitled 'The Alternative Manifesto'. The book has been described as a 'sort of workshop manual for fixing Britain, and it doesn't flinch from getting the spanner round those nasty problems that the politicians of all sides don't want to talk about.' In fact, the cover describes it not as a workshop manual but as a twelve-step plan to wean the political class off their fiscal alcoholism. It's offically released on the 25th Feb, however, early birds can buy it here.
Posted by Dr Michelle Tempest at 11.2.10

Few politicians give the impression of having a grasp of basic economics. They seem unable to predict the feedback effects of their actions and how these will derail their intentions - the "law of unintended consequences" is an unwelcome guest that keeps coming back.

Politicians seem more interested in grand gestures than in delivering real change and real value for money to the taxpayer. Again and again, they make policy decisions that are led by a populist agenda rather than being built on solid economic foundations. They overestimate how much they can achieve in the short term and underestimate how much they can achieve in the long term.

Let's hope that Eamonn Butler's book reminds politicians that "investment" is cant for "spending taxpayers money". Let's hope that "The Alternative Manifesto" addresses the challenges of delivering change that is affordable with the money available today against the need to manage spending over the whole life of a project. Finally, let's hope that the book reminds politicians that we live in a commercial world: there is no place for naivety about the public-private relationship and contract management. Is that too much to hope? I shall be reading with interest.

Thank you NW Durham Voter for your comment. I don't think that is too much to hope for - although our hopes have been dashed by this Labour government. It's time for change and a Conservative government to put the books back in order.

Dr Tempest, of course you're right. We have been badly let down over the last few years by the current Government - my views have been clouded by the dark shadow that Labour has cast over this country. It's probably made me overly critical of the lacklustre performance of our representatives.

It is time for change. The next Government - a new Government - has a significant challenge. We need people with insight, integrity and leadership: good luck with your campaign.