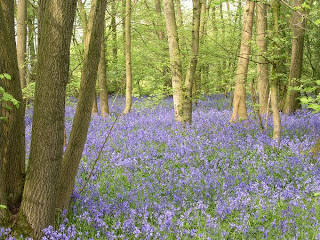 As everyone has enjoyed the hottest April for 300 years, reader (Deborah King) wrote to me asking to blog a piece about the environment, and so thought of the week is - "We can all make a difference".

Sometimes the problem when considering the environment is that the issues are so big they can be perceived as overwhelming, and this can lead people to conclude that they are unable to have any effect. However, as Edmund Burke poignantly said, "No one could make a greater mistake than he who did nothing because he could do only a little." We can all make a difference not only through the effect of our own actions on the environment around us but also by the intangible effect of our own actions potentially inspiring others. Perhaps the best known example of whether humans can make a difference to the environment is the way the destruction of the ozone layer by CFCs was turned around in the 1980s and 1990s following the original discovery of the hole in the ozone layer by a British Antarctic expedition in the 1970s.

It can seem that we are constantly bombarded with ideas about how to help the environment and often it’s hard to boil them down into some simple practical steps. But here are a few suggestions which are commonly made:
1. Drive less and keep your tyres inflated for better fuel efficiency.
2. Re-cycle where you can.
3. Use less electricity by adjusting the thermostat, changing to energy-saving light bulbs and considering low-flow showerheads and washing clothes in warm as opposed to hot water.
4. Save electricity by turning off electrical devices such as your TV, DVD player, stereo and computer when you’re not using them.
5. Avoid products with a lot of packaging.
6. Consider moving to a green electricity provider such as one which uses wind power as opposed to fossil fuels in its processes.
7. Consider off-setting either some of all of your emissions through, for example, joining a scheme which plants trees in proportion to your carbon footprint.
Posted by Dr Michelle Tempest at 6.5.07

Thanks for the tips - very helpful... although it not so hot here today! sarah

On the other hand, we had our coldest April in the last 40 years. Climate change notwithstanding, I envy your warmth. Of course, when I was in England in late November last year it was also inordinately warm. I loved it.
Thanks for your hints, many of which I follow. Your tone re the environment is a comforting one. Check my latest blog, Michelle, and see my views on those who are not so inclusive.
Cheers,
Ian

Hi Michelle,
Nice thought for the week and the Month of May.

Always nice to leave footprints, so that others who follow may enjoy the same beauty in Nature, Virgin Beaches and wherever we tread gently

I agree absolutely in principle. However it is a daunting thought when you consider the projected emissions expected from India and China over the next few decades.

Reminds me of the Mother Teresa philosophy, “If you can't feed a hundred people, then just feed one.”

It's easy to feel overwhelmed by all the struggles or suffering in the world.

Thanks for the tips and the picture.

Thanks to you all for your kind comments - much appreciated.
Michelle

Michelle, I'd go along with all those ideas and practice many of them. It reminded me of what I instinctively feel. There's more than one shade of green, which runs counter to much of the rhetoric that's being spouted just now with its one green fits all approach. Beware the zealot in green clothing.

Or reduce, re-use and recycle.

Whether global warming is man-instigated or not, 'you know it makes sense'!