I Can Not See the Clothes for the Illness 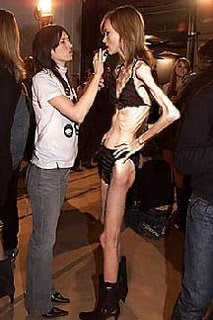 When I saw the television news last night, concern was raised about the fact that the print press were more interested in the ‘size zero model debate’ than the designer clothes on display in London Fashion week. Perhaps this time, the print press have got it right. Anorexia nervosa and bulimia are both on the increase and are currently one of the biggest killers amongst young British women. Although the causes of eating disorders are multi-factorial, few would dispute the social pressures to be thin, especially for women. However, London Fashion week decided against following the medical advice given during the Madrid fashion parade, where models had to have a Body Mass Index (BMI) of 18 or over before going down the catwalk.

Last year, I made up a short exercise to celebrate London Fashion Week: Count the number of times your brain registers an image of a size 0 model between getting up and going to work. Check your cereal box, your newspaper, your morning TV, bill boards at the bus stop. When I carried out this exercise, I was staggered to count 63 models that appeared underweight in less than an hour. This means almost every minute my brain had been subjected to an unhealthy image. Modern society seems used to the phrase ‘you are what you eat’ and accepts that what you put into your body has an affect on body physiology. Yet, people rarely seem to take the next step and conclude that what you put into your head can affect your brain physiology hence, ‘you are what you think’.

Neuroplasticy is the posh sounding name for how brain inputs affect and can change the wiring in the brain. For example, if the brain is analogous to a computer, then it can be modified by creating new connections, deleting files, uploading or upgrading pieces of computer software. This is a somewhat over simplistic view of how the brain works, but considering just how vigilantly programmes are uploaded onto computers, it seems somewhat strange that such a care free attitude is taken to the inputs into our own brain.

It is said that trends within a society can shape the collective culture, in other words, influence internal beliefs and expectations of what is normal. Hence, it’s possible to postulate that if the brain is bombarded with images of unhealthily thin models and given the unsaid impression that this is to be desired, then this will have an affect, perhaps even resetting what was previously considered normal. Currently this debate is rife with the radical change in model size down from the Marilyn Munroe curvy figure of the fifties, to the pre-pubescent shape of the modern size zero vogue, in the aptly named noughties.
Although much research still needs to be done into neuroplasticity, it does highlight the power of brain inputs. Could inputs of size zero models into the conscious and unconscious mind really encourage unhealthy food restriction? Also, could the opposite occur? Despite the fact that I am unaware of any debate or research about this, I ponder the possibility that inputs of underweight models may lead the unconscious brain into the false belief that famine is approaching, hence increasing the appetite so the body can gain weight as an energy store. No matter on the theory, the West is currently in a public health quandary of what causes the modern day epidemic of extremes in BMI; with unhealthy thin and unhealthy overweight. Can it all be down to food, or do brain inputs and neuroplasticity play a part?
Posted by Dr Michelle Tempest at 16.2.07

This picture is truly awful. I read a story this week about two sisters who died from anorexia, I think they were both aspiring models. It's too awful for words. My neighbour believes her friends's daughter has a food problem too, she vomits up her food at home and always refuses to eat at her house. I hope teen magazine can be persuaded to take a responsible line on this, they influence our young girls so much.

Thanks so much for your comments Elle. The papers did indeed tell the tale of two model sisters who have now died. The eldest sister was the model who died just prior to the Madrid fashion show 2006, which caused them to rethink their BMI policy. Her teenage sister has now passed away. As for teen magazines - I guess one way of making them change would be to change our buying habits and only buy magazines which promoted healthy figures - the problem may be in finding one! Thanks again for the comment. Michelle

brain inputs:- I note that our adverts are full of fat kids, and so i think it makes overweight/junk food habits acceptable..

But likewise in reverse:- girls then think that to be beautiful they MUST surely have to be really thin...

Michelle, I have to say if i saw a woman in the street like that I would be in a quandry as to wether to rush her to a soup kitchen or inform the police of the rather obvious abuse that has been going on, if not a war crimes tribunal.

In short the one on the right makes an Auschwitz survivor look healthy.

It is a truly awful picture and I can firmly say that as a man I find that distinctly unatractive.

Clearly what society considers to be normal or ideal does have a great deal of influence over the individual.

Clearly the fashoin mags need to present models who are not only normal, but frankly attractive.

I was talking to a female colleague today who told me the ills of eating fruit because of it's sugar content! She is also rather thin.

What are we doing to ourselves?

Thanks benedict white, I am unsure what 'we are doing to ourselves' and what kind of message society is sending out with such images of fashion. Of course, the illness starts long before the pictures shown on this blog. It's at least heart warming to hear that many people out there don't want to see unhealthy images, so perhaps by using our collective consumer power we could make changes. Michelle

My flatmates are terrible for buying what I consider to be 'trashy' but I have to give most of them credit for pointing out celebs who look like they are losing too much weight. Also pictures of America Ferrera (Ugly Betty, Real Women Have Curves) on the red carpet show her to be among the most beautiful of the stars. Even the 'trashy' mags down here in New Zealand seem to support that and I have been impressed. I am glad I live in a country which seems to support health over size for the most part. (though as always, there are exceptions!)

Tragic. Fashion houses need to take a long hard look at themselves. Instead of demanding clothing in size 0 they should be demanding it in a 4 or 6, sizes models would aspire to.

Thanks Ju´s Little Sister and Michelle for your comments. Perhaps some magazines should come with health warnings on some of their pictures...whatever the answer I'm pleased to see it's creating debate. Michelle

A friend of mine was briefly a catwalk model. Despite having a BMI of 18.2 and looking stunning, she was constantly told she had to lose weight. Wisely, she decided that the money wasn't worth her health, and walked out of the modelling world.

Shocking really, that the fashion industry could show such disregard for the health and safety of their models.

A great post, and I totally agree. Everywhere you look, you see size zero women on adverts, billboards, newspapers and tv programs, and that is what young girls are now believing is the norm.

What really annoys me is tv programs where an actress who is supposed to be portraying a middle-aged, frumpy, overweight mother is actually a size zero actress with razor sharp cheekbones and no body fat to speak of.

We're constantly bombarded by images of stick thin girls. That image that you've posted is horrendous. She looks as though she has come straight out of Auschwitz.

That photo is a fake - a Photoshop job. The body of an anorexic woman has been edited into a photo of a backstage scene.

You can see evidence to support this claim here - http://jeanluc.croix.free.fr/comparaisonimages.htm - scroll down to see the photo in question.

So many thanks for the comments gjhallam, calavera and spirit of 1976. I have no idea about photo changes, but I suspect most photos we see everyday are air brushed in some way. But there are concerns about the eating disorder pandemic and the illness can cause death. Thanks for commenting on the blog. All the very best. Michelle

Thank you for this post. Recently I was questioning myself while watching a documentary about a US anorexia clinic and thinking 'but these women aren't thin they just look normal'. Then I realised, they just look like women portrayed to me everyday, which made me truly frightened about what we're doing to our body images. Doctored picture or not, the point is made.

I've just watched a documentary on Pro Ana sites and my initial reaction was that they're not solely to blame. Having viewed the website that gj hallam refers to, I'm inclined to think that they are far more pernicious than I first believed. Girls visiting these sites know that models are held up as paragons of beauty. If the photos they see on these sites are not true images, then their understanding of what society regards as beautiful is further distorted.

It's impossible to shut websites down, but I would hope that the programs that give parents control over their children's access to the Internet allow access to these sites to be restricted, just as pornographic and other sites are banned.

Anonymous said...
This comment has been removed by the author.
6:33 PM

This photograph is a fake. That is not Kate Moss or even a double
Here is the original.
Google jeanluc.croix.free.fr to see it and others. Translate if you can't read French

If you want to be trusted and believed. Tell the truth the whole truth and nothing but. The any means does not justify the ends

Find the latest Bulimia news and discuss the latest topics with members of the Bulimia and Eating Disorders Community.
--------
george
Bulimia News and Discussion Forum