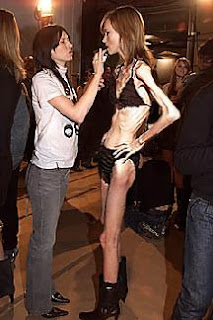 The death of a child is always sad. Last week mother Rosalind Ponomarenko-Jones buried her 19 year old daughter who died from anorexia. She said "burying a child is probably the hardest thing any parent has to contemplate."
This news comes in a week when some fashion shows are not following the advice that models should have a body mass index (BMI) over 18. Rosalind pointed out "When I was a child, smoking was seen as glamorous, but now we all know that it kills. It is hardly seen in films and never promoted in other media. I think the same should be true of emaciated women. Thinness should carry a health warning just like obesity."
Posted by Dr Michelle Tempest at 17.1.07

I think that the fashion press and women's magazines have a large part to play. Stick-thin models from cover to cover, with a token article or letter carrying a critical point of view.

That is horrible! Victims at Auschwitz didn't look half as bad as that model.

Line up the fashionistas that want women to be human coathangers and slap them all with flippersmacks!