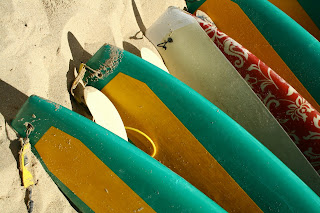 A new book entitled Why Lawyers Should Surf is now available to pre-order. It has been written by myself and Tim Kevan.

In an attempt to prempt the question "why lawyers?", the following offers insight as to why we chose the legal profession to write a book regarding work-life balance.

In an early 1990s a John Hopkins University study compared the rates of depression among 104 occupations and found that lawyers were 3.6 times above the average rate of depression. This then begs the question ‘why do lawyers have such a high level of depression’? There are several hypotheses for this, well beyond the explanation that law is a stressful and busy job.

Professor Martin Seligman argues that the key thing about lawyers is that they tend to have pessimistic personality types. When lawyers are asked the famous question: ‘Is the cup half empty or half full?’ most respond by saying half empty. This somewhat pessimistic response may be seen as an actual advantage in the legal profession, because seeing troubles as pervasive and continuing, is at the heart of being a prudent lawyer. The inherent and honed ‘scepticism skill’, enables the lawyer to see every conceivable snare and catastrophe that might occur in legal transactions. Therefore, the ability to anticipate any pending or possible snag or disaster gives a positive legal outcome, as the lawyer can then help clients defend against those negative eventualities. Hence, ‘pervasive pessimism’ and possibly ‘catastrophizing’ can be seen as powerful tools in law, helping to anticipate disaster, and encouraging lawyers to think the worst before it has happened. However, on the flip side of that same coin, is that if you take the same pessimistic mindset home with you from the office, it may form part of the answer as to why lawyers are more likely to suffer with low moods.

Another hypothesis is that lawyers tend to express ‘high-dominance’ as a key feature of their personality; again something which aids successful legal careers. Key features of a ‘high-dominance’ personality include people who: interrupt others, talk longer, take charge of conversations, decide when to change topic, state strong preferences and opinions, have an unyielding manner and tend to enjoy giving instructions and advice. ‘High dominance’ personalities also tend to believe in statements, such as, ‘winning is more important than playing the game’. This may be an integral part of being a successful lawyer who never looses a battle, however, when this mindset is extended outside the workplace it fits less well with life’s challenges. When things have not gone the way high dominance personalities have planned it can be a time when they struggle to manage.

The risk of the inherent pessimism in many lawyers means that they have to be particularly careful not to bring that perspective into every area of their lives. How circumstances are translated in any particular person can have enormous effects on the way they react and ultimately on the effect those circumstances have on their lives. This book will hopefully assist in finding a perspective where even the most difficult times can be seen in some sort of context which can also provide something useful, something to learn or grow from. As Shakespeare said, “There is nothing either good or bad, but thinking makes it so”.

The above photograph was taken by and is copyright of Dr Heidi Tempest.
Posted by Dr Michelle Tempest at 27.1.07

Um, you need to check out Bowl of Stupid. He's a lawyer who surfs...in Florida. He's on MyBlogLog dude.

Will check this out - many thanks for the heads up on that.

Michelle, can you give me a reference for the 1990 Johns Hopkins study?