Who Cares for the Caring Profession? 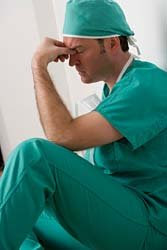 With thanks to Dr Crippen and Newsnight for highlighting these grave statistics. Next month Newsnight are showing a documentary, "Struggling in Silence". They explore the dark side of the profession, about the little-known and rarely discussed problem of depression and suicide among physicians. The unsettling truth is that doctors have the highest rate of suicide of any profession. They report:

“Every year, between 300 and 400 physicians take their own lives—roughly one a day.”
That shocking statistic speaks for itself.
Posted by Dr Michelle Tempest at 23.4.08

I'm truly appalled to learn of this. I hope it is an issue that will be given the highest priority.

Thanks Ellee for your concern.