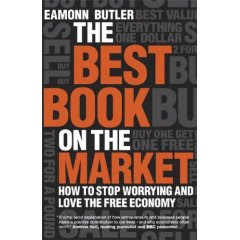 Today I'm delighted to have a star guest blogger, Dr Eamonn Butler, director of the Adam Smith Institute. He explains a mixture of economics and healthcare:

The political enthusiasts of state-funded (and worse, state-run) healthcare make me sick. I'm sick of being told that "We don't want the free-market American healthcare system here. It leaves millions of uninsured people to die on the street."

But that's a caricature of America. The American healthcare system is deeply flawed, that's for sure. I wouldn't want to reproduce it here. But it spends more on state-funded healthcare for elderly and poorer people than we do, and (thanks to a helpful tax system), its medical and healthcare charities are larger and stronger too. American's simply aren't doomed to die in the gutter because they can't afford doctors' bills.

And it's hardly a free market. In fact, it's the most regulated system in the world. When – to show how pro-consumer they are – some state governments insist that insurers should cover absolutely everything, is it any wonder that insurance becomes unaffordable? You might want a Fiat policy, but you don't get the option: only Rolls-Royce versions are on offer.

Worse, the whole system is in thrall to the doctors. The mediaeval guilds built themselves cosy monopolies by getting legislators to outlaw their competition under the guise of 'maintaining standards'. And as I say in my new book on markets (modestly entitled The Best Book on the Market):

What’s remarkable is that exactly the same still happens today. The medical profession is the most powerful mediaeval-style guild in America. To practise, you need a licence from the state, and to be a graduate of an approved medical school. But it’s the profession itself that approves the schools and decides how many people will be admitted. So the number of potential competitors is limited, and fees soar. The cutlers and hatters of Elizabethan England would have been proud of them.

I fear that many people who deny the role of markets in solving our deepest problems – like the provision of mental health and other public services – don't actually understand how markets work and how to make use of them. I hope my book might enlighten them. And I've written it in a light, accessible, Freakonomics style that, with luck, even politicians should be able to understand!

To buy ‘The Best Book on the Market’ click here.
Posted by Dr Michelle Tempest at 12.4.08

Although I would agree that an introduction of the market into primary healthcare would bring some welcome competition for arrogant, monopoly-owning GP practices, I do fear a system where primary care is offered solely by media/supermarket giants. For in the same way that the personal service of the local shop has almost been erased, established GP practices that understand the needs of their local communities could be lost forever. Not all returns from introducing 'market forces' to UK healthcare will necessarily be positive.

Hi, I was wondering if you'd link to my psychology blog, its address is:

im a journalist who writes on psychology (particularly CBT and positive psychology) for publications such as The Times, Prospect, Psychologies and others.

If you linked id be happy to link back! sorry to post this as a comment, i couldnt find contact details on the site. my email is jules.evans@mac.com