A Vascular Surgeon to the Rescue 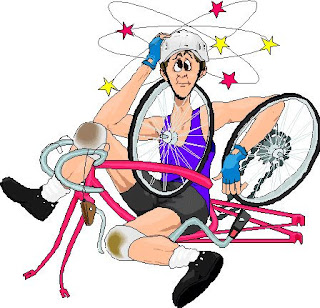 Today several newspapers reported how a retired teacher severed an artery after falling off her bike, and impaling herself on the handlebars. She was luckily saved by vascular surgeon, John Thompson, who just happened to be passing by. He not only treated her at the scene but then followed the ambulance to hospital and operated on her leg himself.

In a short time she had lost a quarter of the blood in her body, and unless he had been there to administer the acute care, she would have died in minutes. Mr Thompson, described his being there as, “an amazing stroke of luck.”
The political anology seems unmistakable. NuLabour have reinvented the NHS wheel so many times, they’ve fallen off and impaled themselves, wasting money on computer systems, red tape and quangocrats. However, for them, I doubt there’ll be a passing vascular surgeon to save the day. They’ve reduced training posts and medical training so radically, that their haemorrhage of support is critical.
Posted by Dr Michelle Tempest at 3.5.08

Sadly, if one stretches the NHS/Bike analogy further, Labour have employed 20 people to design the bike, 10 people to build the bike and, perhaps, one to ride it. The next Conservative govenrment will have no choice but to lay off thousands of admin/managerial staff in order to afford to provide the increased number of 'vascular surgeons' needed to treat our increasingly obese society. Andrew Lansley (or his successor) will have have some tough decsions to make...

Just thought I would pop in and say hi, soon we will be rid of Labour !

Cripes, I think I'll go a little more carefully next time I go out on my bike! Glad to find you are still here :-)

she was lucky the nurse specialists wasn't passing instead, in the time she would have taken to mince around before calling for help most of the circulating volume would be no more....