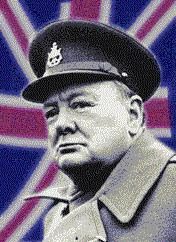 “the metaphor is perhaps one of man’s most fruitful potentialities. Its efficacy verges on magic, and it seems a tool for creation which God forgot inside one of His creatures when He made him.”
Jose Ortega y gasset

The master of metaphor Winston Churchill understood that to make something understandable, the message had to be given to the receivers’ brain in a way the brain can create a picture with it; after all, a picture can incorporate a thousand words. Nearly everyone finds it easier to understand in terms of metaphors. For example, “struggling to keep my head above water”, is a cry many people howl when they have taken on too much work.
It is interesting to consider the power of metaphors within our own internal questioning. Can internal stress be increased by saying you're “struggling to keep your head above water” rather than “climbing the ladder of success”? If working is seen in a similar light as “pulling teeth”, will it make the task much more arduous than if it was seen as “playing a game”? When a metaphor is given, it’s important to remember the framework it’s sending your internal mind. It is far easier supporting the mind, than informing it about the possibility of drowning or having teeth removed.
The power of metaphors is dicussed futher in the new book (due start 2007) 'Why Lawyers Should Surf' by myself and Mr Tim Kevan
Posted by Dr Michelle Tempest at 21.9.06